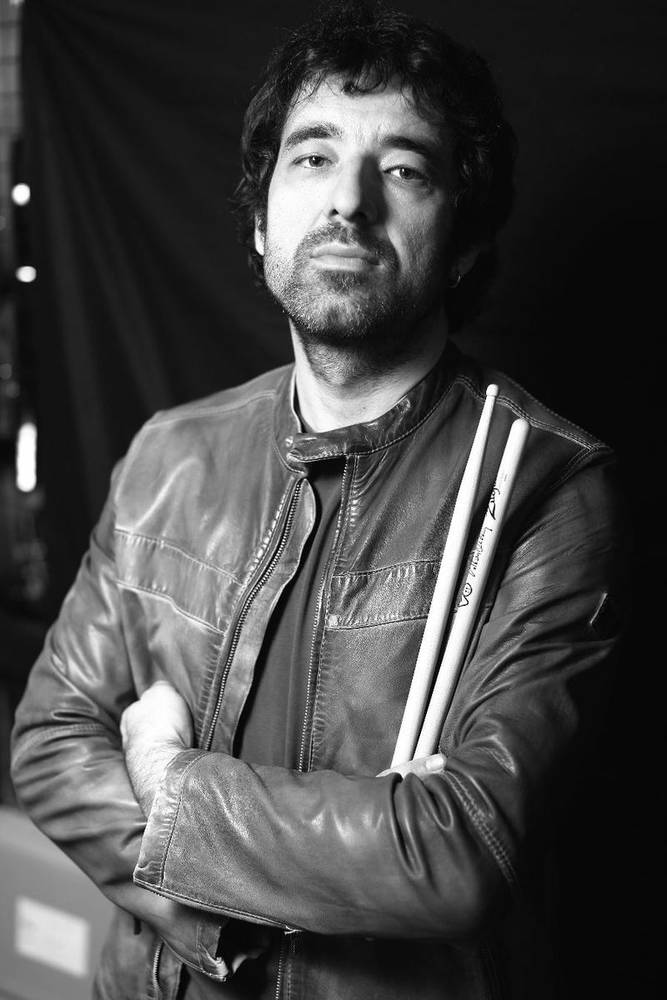 Volkan Öktem was born on June 25, 1970 in Izmir. He became interested in music around the age of 7. When he was 11, he started playing the drums with military musicians at the local Officers’ Club. In 1985, he relocated to Ankara, where he got a chance to play with many different rock and pop bands, including Alpay for 3 years, who was one of most famous singers of the time. He also peformed at various night clubs, playing a diverse repertoire, including traditional Turkish music. This gave him a chance to develop his understanding of rhythm furthermore and laid the foundations of his personal and unique style.

Because of his interest in jazz music, he gravitated towards performing at various jazz gigs, where he played with some of the best musicians, such as pianist Tuna Otenel and Janusz Szprot. During this time, he made quite a following for himself and his name began circulating in the music industry. He considered some offers and decided to move to Istanbul in 1994. This was the beginning of a new era in his life…

He performed on more than 100 albums in Istanbul with many different artists, such as Sezen Aksu, Fahir Atakoglu and Nilufer. He also played with international musicians and groups at different clubs and concerts around the globe.

In 1996, he collaberated with 6 other musicians and formed the group “Habbecik” and performed on his first ethnic jazz project. Habbecik released an album named “An meselesi” and continued playing at music festivals and concerts for several years. Also in 1996, he and a couple of his good friends formed the jazz fusion group named Trio Mrio. Several years later, with the addition of another friend, they released their first album “9 parca (9 singles)” and renamed the group Quartet Muartet appropriately. With an ever increasing fan base, they still work together and perform at various clubs and concerts.

In 1999, he found the perfect environment to reflect his unique style, when he and several other musicians formed “Laco Tayfa”, which fuses traditional Turkish music with jazz, funk and reggea. They released two albums named “Bergama Gaydasi” and “Hicaz Dolap”. They performed locally as well as globally at many concerts, such as; New York Central Park USA in May 2002 and 9th International Istanbul Jazz Festival in July 2002.

He played with Sertab Erener, the winner of  2002 Eurovision Song Contest, at local and global venues. In the meantime, he still participated in various jazz projects, continued working on albums and kept on performing at concerts.

He performed on Askin Arsunan’s “One a day” album and also played at 7th International Istanbul Jazz Festival with Askin Arsunan Ethno-Karma Band in July 2000. In July 2004, he played with John Scofield in 11th International Istanbul Jazz Festival. Furthermore, in Jannuary 2005 he played with Bendik Hofseth “Down to Earth” project in Is Sanat Jazz Days.

In July 2005, he performed at 12th International Istanbul Jazz Festival, with Muvaffak “Muffy” Falay and Elvan Araci, and also played with İstanbul Superband for Dianne Reeves.

He played in Aydin Esen Group with Aydin Esen and Selcuk Karaman, in Sunside Jazz Club-Paris on September 22nd, 2009, on February 2010 Ankara Jazz Festival and on March 2010 feat. Wolfgang Muthspiel at Porgy and Bess Club in Vienna.

Presently, Volkan Öktem is touring with Tarkan, one of the most famous musicians in Turkey, playing at concerts in many cities in Turkey and Europe. He still continues working on studio recordings in Turkey, as well as performing internationally for various projects.